« These works are about connections:- between past and present, between here and there, and between old and new.
For services rendered after a recent major Marae project, the koha from my hapu was varied and one of its elements was a large Niho Paraoa or sperm whales tooth. The honour i felt from this i cannot measure.
After lengthy contemplation i decided to split the Niho in half and carved a Rei Niho, an amulet based on the ancient forms created by our forebears over 1000 years ago upon their arrival in Aotearoa. The taonga created from this time are enigmatic and arresting in their beauty and execution. I have been drawn to them from my high school days after discovering them through the survey of H. D. Skinner in his writings titled ‘archiac maori pendants in bone stone and shell’. 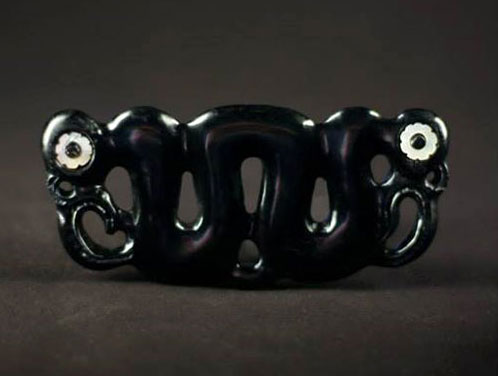 They formed my lifetime association with maori connections to polynesia, which i expressed in my art actively throughout the nineties during my time with Teremoana, resulting in the birth of our two sons Kahuti and Naboua. In particular i was prolific in the production of mother of pearl shell carving- the oldest taonga found in Aotearoa is a pearl shell lure from our origins in Te Moananui.

The journey of connections continued with my time with Maia – also resulting in the birth of our son Te Aonehe. Maia is an anthropologist specializing in Austral island material culture and i was once again exposed to the enigma of those early taonga from there and the connection to Aotearoa.

Through Maia i was privileged to see collections in the UK up close and spent countless hours discussing and debating with her the myriad connections. I saw the obvious connections in Austral island Tawhiri and the dynamic figures on the ends of Hoe-maori or paddles. All of these moments in space and time took me back again and again to those drawings of Skinner.

Also significant for me was the use by our forebears of transferring artistic ideas into the new materials at hand- pearl shell and whale ivory ultimately found new expressions of old ideas in serpentine, slate and pounamu.
For me i feel i continue this connection of the past and the present here in medieval Rouen with Mathilde and also by my use of Plexiglass to express ancient themes in the new divinity of plastic…
I am grateful to Reinhart Cosaert, who took the first eleven images and Martine Giraud, who took the last, for these photographs… Arohatonu »